We’re going to take a quick tour through loops and gesture modes before we get back into more modulation. But stick with me. This will open up some new ways of performing with Jambé.

In general, loops are sections of audio that can be repeated. This might be an entire sample file, or only a portion of it. The latter was very common in the early days of samplers. If you think of a note in terms of the classic Attack, Decay, Sustain, Release (ADSR) sections, the attack of a sound is typically very complex. It’s where a lot of the distinctive character of a sound comes from. The sustain is often a periodic waveform. It’s easy to repeat that section in a loop to extend the length of a note. The release is often just an amplitude scaled version of the sustain section. Most often you’d find loops in the sustain section. You would also sometimes find loops in the release section as well. Jambé supports both sustain and release loops.

How does the Jambé app know which portion of a sample file to loop? Through the loop markers embedded in the files. If you happen to have sample files with loop markers in them you’re set. But that’s not as common these days. Especially with samples you find on the Internet. Fortunately, the Jambé app provides a way to set and edit loop markers.

Before we get started, you should download the example kit that goes along with this post. It has some samples we can work with, and it’ll get referred to throughout the rest of this post. You can find it – here

There are 3 instruments in this kit, assigned to pads 1 through 3. You’ll notice the first instrument has an odd name – “06(90).” All of these instruments were created by dragging a sample onto a pad. This creates a new instrument with the name of the sample. Some basic modulation is set up as well. I didn’t bother to rename any of the instruments.

Tap on “Kit Samples” and then on the “Bari.wav” sample.

At the bottom of the screen, you’ll notice that information about the sample file is displayed – sample rate, number of channels, format, etc. Note that there’s a sustain loop that goes in the forward direction and no release loop.

The Jambé app has a simple Loop Editor that allows you to add and edit loop markers. This shouldn’t be confused with a sample editor. None of the edits alter the samples in the file. If you want to trim samples, etc. you need to do that in an external application.

Tap on the “Edit Loops” button to open the Loop Editor for the selected sample.

You can drag in the “Loop End” and “Loop Start” waveforms to line up the loop point. If you click the top speaker icon at the left you can preview the loop. You’ll notice that it loops cleanly because there isn’t a big jump in the waveform at the loop point.

For contrast let’s look at “TripleCBell90-03.wav” and you’ll see it has no loop.

And we see this when we open its Loop Editor.

As expected, there are no loop markers. Tapping the “Forward” button will add loop markers at the beginning and end of the sample file. You can edit the loop markers from there. With samples from online loop libraries, looping the entire sample might be all you need. The “Forward-Backward” button plays the samples between the “Loop Start” and “Loop End” markers back and forth. When the “Loop End” is reached, the samples are played in reverse until the “Loop Start” is reached. Then it begins playing forward until “Loop End. It can be an interesting effect.

Gesture Modes let you select what a strike on a pad does. You can find it at the lower right of the Kit Editor.

“Normal” – This is the gesture mode you should be the most familiar with. It’s used in most all of our kits. The note starts when the pad is struck. The note isn’t released until the pressure on the pad is released. In a normal hit, it behaves exactly like you’d expect a percussion instrument to behave. Once started, the instrument’s samples play to their end. But, if you maintain pressure on the pad AND there’s a sustain loop in the sample, the note will sustain until the pressure is released – similar to a keyboard. You can try this now on Pad 1 with the “Bari” instrument. Just imagine, a drum with sustain!

“Start/Stop” – The note starts when the pad is struck. The next hit on the pad stops the note. The following hit will restart the sample from the beginning, and so on. This is best used with samples that loop or very long samples. How long? We’ve tested the Jambé with samples over an hour in length with no problem.

“Pause/Cont” – The note starts when the pad is struck. A second hit will pause it. The third hit will start it playing from where it was paused. Again, best used with loops or long samples.

“Mod Only” – In this mode, strikes don’t trigger notes, only modulation. To trigger the sound, you need to enable “Trig on Load.” It’s located right next to the “Gesture:” drop down. This triggers the pad when the kit is loaded.co This has a lot of possibilities, again with samples that loop or very long sounds.

If you click on Pad 2, you’ll notice that it has “Trig on Load” set. Why haven’t you been hearing it? Press on the pad and you’ll hear it fade in and out based on pressure. If you look at the Instrument’s Mod Path, you’ll see that Pad 2 Pressure -> Trim.

There are some classic songs that have relied on using a mixing board as an instrument, fading loops in and out. The Beatles’ “Tomorrow Never Knows” and 10cc’s “I’m Not In Love” both come to mind. You can use the same technique with Jambé’s pads.

There’s a lot to explore with incorporating simple loops and longer samples into a Jambé kit. I’ve used this on occasion to trigger a backing track while still having pads to use for percussion. I’ve also played with fading in and out of long samples of synth pads. That way the pads don’t always have the same start to them. Let me know what you come up with. 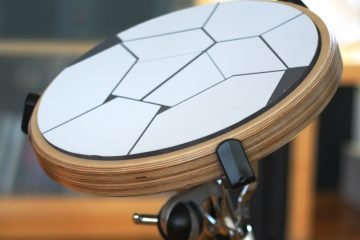 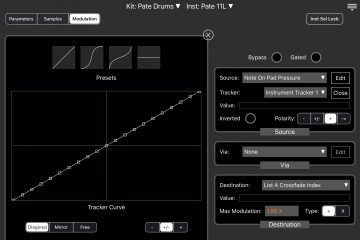