But the similarities end there.

Welcome to a new type of electronic instrument.

It’s easy to mistake Jambé for yet another electronic drum. Or, perhaps a high-end practice pad. Dig deeper and you’ll discover a new type of electronic instrument. One that combines continuous data from high resolution sensors with an extensible sound engine and editor designed specifically around it. An instrument that leverages a percussionist’s muscle memory in much the same way keyboard synthesizers leverage a pianist’s muscle-memory. Expressive and powerful enough for professionals, accessible and easy enough to use for beginners. An instrument you can grow with, no matter where you start.

Jambé’s story began with a consulting project to create a MIDI hand drum controller. The client, a very large musical instrument manufacturer, decided to abandon the project. We considered finishing the project on our own. But the more we thought about it, the more we were pulled in a different direction. One focused on expressiveness and extensibility.  One focused on the future.

Jambé’s 10 pads use force sensing resistors (FSRs) to read the pressure on each pad at 10-bit resolution, which works out to around 1,000 pressure levels. We scan each pad 1,000 times a second. That data gets sent to the Jambé app running on an iPad. The app includes the sound engine as well as a full featured editor/librarian.

It’s best to think of Jambé and the iPad together as a complete instrument. The Jambé can be powered by the iPad’s battery and the iPad is small enough to be easily mounted on a drum stand alongside the Jambé. Apple’s App Store makes it far easier to update the application than the typical firmware updates some hardware products require.

Note that there are no sensors in the black areas. They provide a convenient place to grab the instrument while moving it around.

Why the hardware and a separate app?

It’s no secret electronics get faster (and cheaper) every year. We wanted to be able to take advantage of the trend by not building in the sound generation hardware. This lets us continue to innovate and evolve the application without being constrained. It’s also far easier to update a separate application.

So the hardware is just a controller?
Is it MIDI?
Can I use it to control other apps?

“Not really”, “Yes”, and “Not at the moment”. Seriously, I suppose you could refer to the playing surface as a controller in the sense that it doesn’t make sound and sends information to something that does. We use some non-standard MIDI commands to send the raw data between the the playing surface and the application, but it’s not anything you could route to a MIDI synthesizer and use. The reason for this comes back to wanting to put as much of the processing in the application. This lets us continue to improve the way we translate your touch into expressive sound. We continue to think about integrating with other applications. Right now, we’re focused on our own application.

Why not just use MIDI?

MIDI was largely designed around the idea that there is a gesture that starts a sound and a corresponding one that ends the sound – “Note On” and “Note Off”. But that doesn’t model what happens with percussion instruments. Typically, a percussion instrument starts to make sound when it’s hit. But the sound doesn’t end at the end of the hit. It continues until the surface stops vibrating. This was just the starting point on our path to rethinking how we want to start, stop, and control sounds. We get the most flexibility by sending a rich set of raw data to the application and letting it use that to directly control the sound it produces.

What do I need?

The Jambé playing surface can be purchased directly from us at our Jambé Store. Included is a cable to go from between the Jambé and the iPad. This cable has a USB-A adapter. Depending on your iPad model, you’ll probably need an adapter. More on that below.

You’ll also need an iPad running iOS 13 or later. This means an iPad Air2, iPad Mini4 or later. Obviously, the faster the better.

The Jambé app can run on an iPhone but you lose all of the editing features, so an iPad is strongly recommended.

If your iPad has a Lightning connector, you’ll probably want to pick up the Apple Camera Connector kit (Model number MD821AM/A or MK0W2AM/A) If you have one of the new iPad Pro models with a USB-C or Thunderbolt connector, you’ll need an adapter for that. The good news is that there are a lot of third party USB-C adapters that seem to work just fine.

You might decide to use a USB hub. In our testing, this works fine. One of the advantages of using a powered USB hub is the ability to use an external audio interface with your iPad. This can provide higher quality output as well as audio in and MIDI in. The Jambé can take advantage of both. 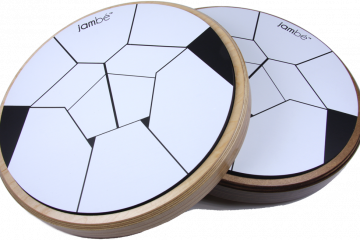 What exactly is a Jambé?